The Boston Philharmonic Youth Orchestra’s Symphony Hall concert on Friday night revealed an ensemble fully armed artistically for its upcoming embarkation on a tour of Greece. Of course, the armaments these “Bright and Loving (BZ) Youngsters” will bring to European listeners will seek to disarm anyone in the resident theaters. And as part of his apology for playing Russian composers for what was to be a tour of Russia, Benjamin Zander admitted that the message will nonetheless comfort Ukrainian victims in the theater of war and reinforce the idea that the best Russians like Tolstoy, Dostoyevsky and the great composers better illustrate the Russian soul than its current leaders. In addition, he pointed to Prokofiev’s Ukrainian birth and Tchaikovsky’s Ukrainian connections.

A year after Stalin’s death, Shostakovich wrote his Festive Overture Op. 96 on demand on the occasion of the 37and anniversary of the Bolshevik revolution. In its seven-minute runtime, it provides enough upbeat, nostalgic, triumphant, martial material and simple delights to prove the mettle of any touring orchestra. And it can be used for any celebratory occasion, like the Olympics or the Nobel Prizes… and for any team or country for that matter. After the fanfare of brass and timpani from Korngoldish, the clarinets trotted melodically in a melody taken up by the flutes then raised in tutti. After lots of windups, hesitations, curves and fastballs, the terrific final accelando left us in awe. The proof of chops and courage came early and often. 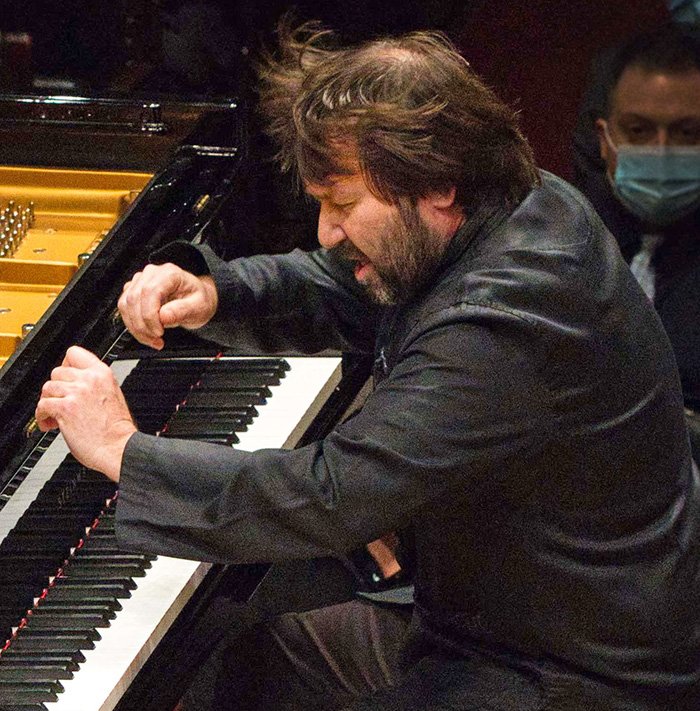 Zander proudly introduced Georgian Alexander Korsantia as one of today’s great pianists and a master in particular of Prokofiev’s Third Piano Concerto. “Think of it like classical music with off notes,” he said. After a leisurely start with the clarinets, the gurgling of the strings prompted the pianist to immediately get to work with rapid scalar passages. Korsantia didn’t keep watch in fast, noisy passages, but at other times just blended into the textures like another color instrument. Zander has managed the extremes of dynamics, many ps to turbulent, brutal and precipitous explosions with numerous Fs. Lyrical refinement came as clarinetist Alexander Ehrlich-Herzog soared. Prokofiev never jokes, he keeps us spellbound because no mood predominates. If he evokes someone else’s Pictures at an exhibition at one point, then comes a moment that could only come from his pen, these slips in the high strings underlined by Chinese blocks.

The andante seemed to anticipate Alexander Nevskyand other passage motifs could come from the classical symphony or Pierre and the Wolf. One of the main pleasures of listening to Prokofiev is identifying the materials he so often reused in his extraordinary bag of tricks. Korsantia’s take on the brief, dreamy but moving cadence anticipated her encore. The way Prokofiev fractalized the melodic elements into so many shooting stars gave Zander great leeway to zoom and cycle through sections and solos during these elaborations and travesties. As earthy bombshell alternated with quiet rest, he showed no fear of relaxation or overwork. Other gripping moments included haunting horn calls over pianissimo strings before Korsantia’s magic of quest, anticipation and improvisation. Then it went back to the races for no particular reason, except that it was the right time.

The third movement Allegro ma non troppo would blanch or break the knuckles of most performers other than the composer, Korsantia and a few select others. Korsantia and Prokofiev could hardly be more different scenically, however. Prokofiev was famous for his unflappable stage presence, while Korsantia undergoes contortions and gyrations that televise his inner thoughts. Some contracts for large orchestras, BTW, prohibit musicians from moving around, while Zander encourages everyone to feel the music and sway, as they did so breathtakingly in Prokofiev Waltz. Korsantia (and the orchestra) dramatized with great breadth, but the quiet rhapsodic segments where low strings accompanied Korsantia’s left-hand scales and blocky right-hand melodies proved telling. In the bigger moments, the flat bow accents of the top strings sounded in sync with the cue. The last research interrogation of the winds seemed to ask: “Is this contingent ready for the European public and press”, to which the tutti and the piano (with astonishing Liszt-defying scales, octaves, trills and ornaments) ended with a “Definitely Yes!”

The audience and orchestra telegraphed their agreement with stomping and cheering. At the height of this frenzy, Zander was careful to assert that “every citizen of the free world must show solidarity with Ukraine and regard Putin as an enemy.” No one protested the sentiment.

To calm things down a bit, Korsantia enhanced Bolcom’s “Graceful Ghost Rag” with a blissful and luminous narrative, which made me think of Brahms’ FAF (Free but Happy). Surprisingly, the piano remained in tune after the previous punch. Bittersweet and never pushing the swing too hard, Korsantia channeled a consoling resignation. Could he have “…taught the world to sing in [such] perfect harmony.” 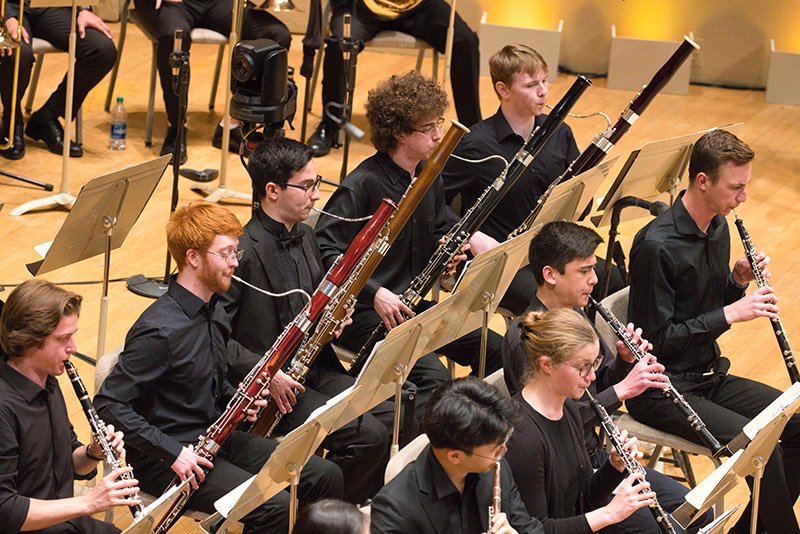 Zander talked about Tchaikovsky’s Symphony No. 6, Pathetic, as the “sadest music in the world”. In his reduction of the first movement as representations of 1. Anticipating death, 2. Life and love, 3. Aspiration, then the 4and movement. Looking at death unflinchingly, he postulated a suicidal Tchaikovsky rather than one who caught cholera from bad water. Experts continue to differ. (The document confusingly showed the movements of the Tchaikovsky Fifth for some reason.)

Either way, Zander delivered the old chestnut on his own terms, with no apparent attempt to indulge in romantic excess or strip the accretions down to something neat. Throughout, he evoked the deepest feelings of the moment without ever going maudlin, even as he characterized the happiest riffs such as “smile through clenched teeth” and performed the waltz transition into a cheeky march towards the scaffold.

A desperate and soulful bassoon proposal from Daniel McCarty led to an assertion from the lower strings. The horn nodded in agreement. After a pregnancy Luftpause, the group repeats and dresses up the first tune, then swells. The top strings added their embellishments as the winds continued to raise the bar. Out of breath, we wondered, what will the master tell us? The brass briefly announced something was coming, but again, it’s a tease. The first hints of the great melody came in restrained understatement. Zander fired some succulent taffy as the anticipation grew. After eight minutes, the glory of tutti shone into life, affirming splendor, constituting no anticipation of death to these ears. As the tune receives the full technicolor treatment, the clarinet fades, the horns and strings knock on the door, and the race begins. Through all of the transitions and transfers, Zander has done something consistent with the sometimes competing episodes. He masterfully kept a steady pulse under his tempo inflections and subtle rubatos. His attention to dynamics allowed even the ppppp low notes on the bass clarinet to wear. Timpani Ritvik Yaparpalvi impressed in his many exposed passages at all dynamic levels, conveying more emotional variety than we usually get from cans. Mind-blowing pathos often sprang from the massive tutti, but just as often morphed into solo meditations. We could hear Sugar Plum Fairies in unclouded yet consistent antics. A frothy Mendelssohn scherzo elicited smiles before the piccolo’s vivacious ruffles and flourishes set off the offbeat waltz to become menacing, martial, fast and triumphant. Applause ensued against the conductor’s wishes. 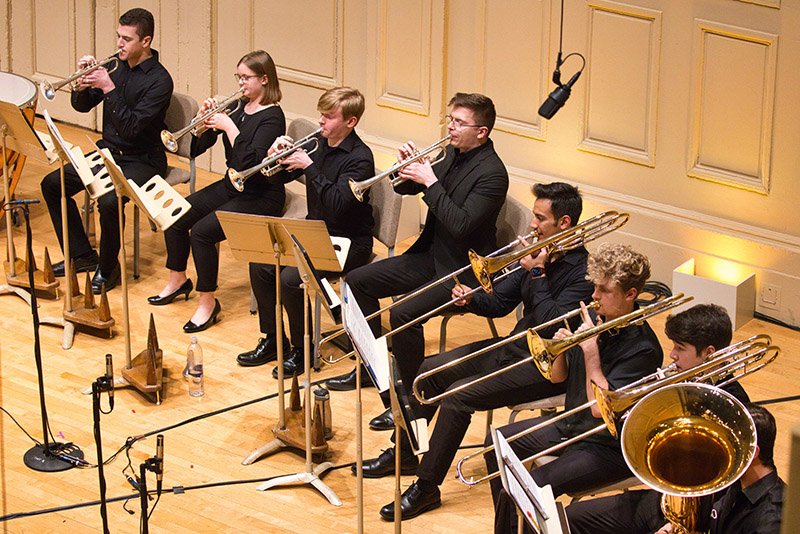 The Finale: Adagio lamentoso hardly provides the expected end to a great romantic symphony; it vaporizes in a minor mode like no other among Tchaikovsky’s six. It certainly combats the inevitably fatal outcome of life, as obsessively compulsive war themes contrast with insistent descending scales. The Strings have become a determined organism unafraid to collectively shed tears or outright sob. At times, the moans of the dead echoed through this Temple of Culture with pathetic effect, as the attempt to survive and rise again grew increasingly futile. Sadness overwhelms aspiration as brass prophesies the futility of struggle. The heartbeat of the timpani fades away like a dying swan as the cellos and basses let out the last muffled cry of pain. Tchaikovsky’s symphonic production and his life end like this morendo.

Zander waited about 15 seconds to drop his baton. Then a single, so early, bravo began the warm salute to the players and their leader on this crossfade of a sad symphony and the bittersweet conclusions of their guard shifts for many young players. In the best British upper crust and stiff upper lip fashion, Zander sealed the deal for his starters with a friendly, non-tragic crossing of ‘Nimrod’ from the Enigma Variants.

And what has BPYO meant to these departing souls? Former player Hayley Miller Grainger, who recently joined the Dallas Symphony, tells us:

Benjamin Zander has created a utopian orchestral landscape like no other. What a wonderful gift to have experienced a place where a diverse group of young musicians can come together to create some of the most compelling music I have ever known. BPYO celebrated each member’s unique talents and perspectives; we have been allowed and encouraged to be authentic, with all our glorious imperfections. We learned together. Barriers were lifted and we were able to freely offer the best of ourselves to upcoming performances. My appreciation for this space has only deepened over time: I couldn’t have realized what a beautiful and rare landscape it was. At the time, it was a haven of peace. Today is encouragement and support. 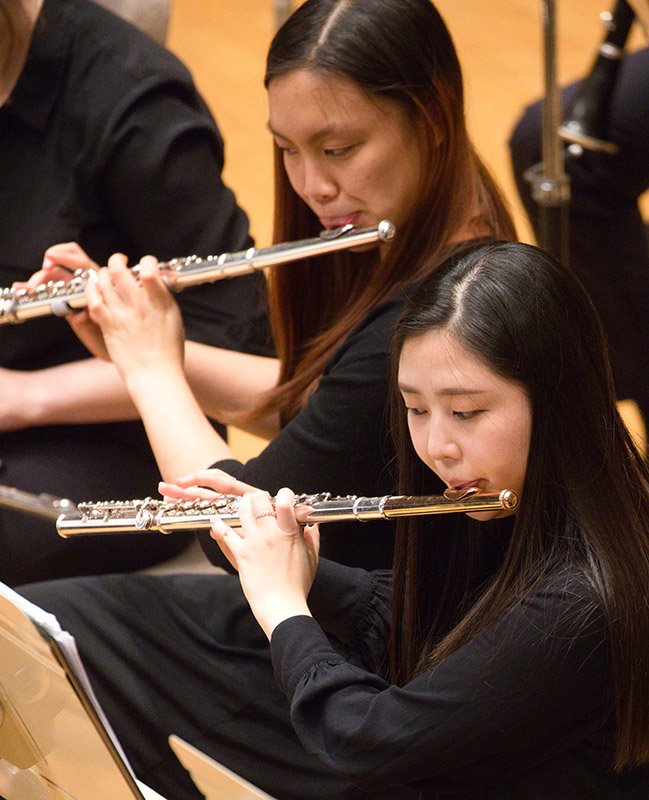 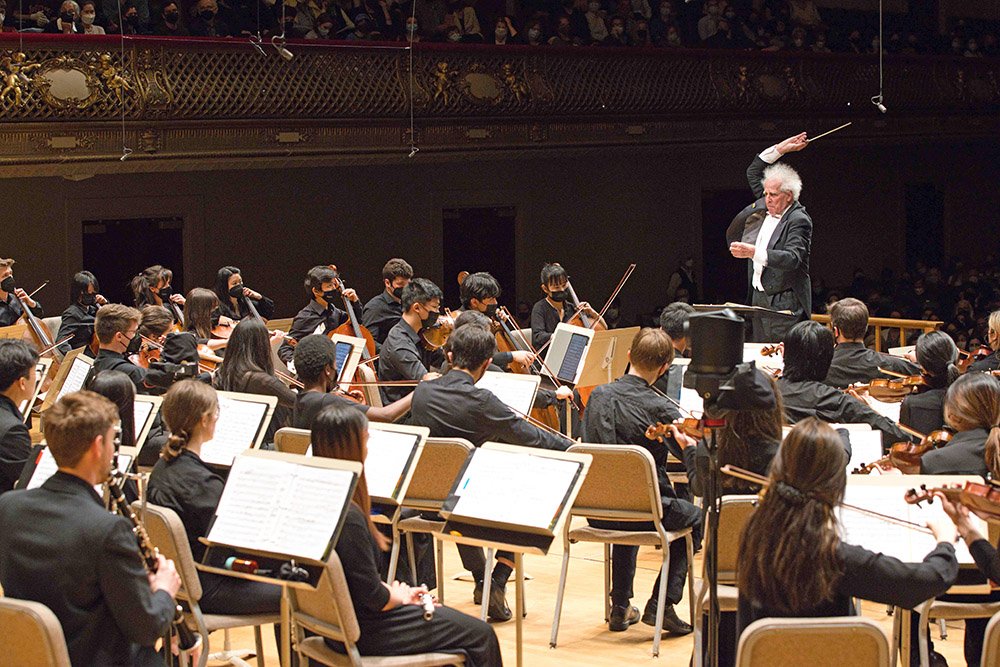